(RNS) — Most Americans plan to give a dozen gifts during the holiday season, put at least some decorations up on their house and will leave their Christmas tree up until the new year or a bit longer.

They also worry that people have forgotten the real meaning of Christmas.

Some still believe in Santa.

And not everyone cares what Mariah Carey wants for Christmas.

Those are among the findings of a recent holiday-related survey from Ipsos, a global public opinion polling and market research firm. The survey of 1,023 adults, fielded in early December, asked about a variety of topics, from when it’s OK to start playing Christmas music in public to whether Americans would be comfortable attending a holiday party thrown by someone from a different religion than their own.

Three-quarters of those surveyed agreed with the statement “Most Americans have forgotten the real meaning of Christmas,” including 84% of Christians and 60% of those with no religion. Americans over 65 (81%) and those 18-24 (66%) agreed, as did Republicans (88%) and Democrats (66%).

The survey did not identify the real meaning of Christmas.

Americans did appear to keep their faith in Santa — about half (48%) of those with kids under 18 said the kids believe in Santa, while 21% of adults said they did as well. And 70% said they’d be comfortable going to a holiday party that celebrated a different faith than their own.

The survey revealed some strong feelings about Christmas music. Fifteen percent of Americans felt that the most annoying or overplayed Christmas song was either “All I Want for Christmas Is You” (12%) — a 1994 hit by Carey that still tops the Billboard charts— or any other song by Carey (3%).

“Jingle Bells” (6%), “Grandma Got Run Over By a Reindeer” (5%), “Santa Baby” (2%) and a catchall answer of “all Christmas songs” (4%) also got votes for most annoying or overplayed. Sixteen other songs — from “Rudolph the Red-Nosed Reindeer” to “White Christmas” — annoy at least 1% of Americans. 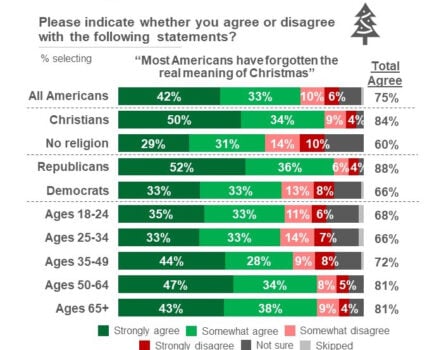 A recent survey asked Americans if they felt most Americans had forgotten the real meaning of Christmas. Courtesy of the Clyde Group

Nearly half (46%) did not name a song that bugged them. Almost all of those surveyed (94%) said Christmas songs should not be played in public until after Thanksgiving.

“Grandma Got Run Over By a Reindeer” and “Santa Baby,” along with “The Christmas Shoes,” “Please Daddy Don’t Get Drunk This Christmas” and “Mary Did You Know,” made a list of the worst Christmas songs compiled by writer and author Emmy Kegler