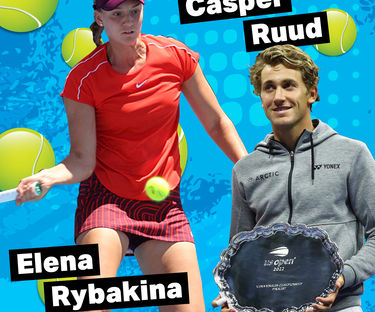 We’ve complied a list of the big names that have hit the court at the Playford Tennis International over the years.

The City of Playford
Tennis International is fast gaining a reputation as the champion maker of
tennis tournaments, with past players going on to hit the big time on the world
circuit.

Forming part of the
Men’s ATP Challenger and Women’s ITF Futures programs, in just four years the
Playford International has produced Wimbledon champions, world top five players
and a slew of US and Australian Open competitors.

The International will
return this year, to the Playford Tennis Centre from 24 October, where the
champs of the future will again take to the court – and locals will have the
chance to catch future superstars in action.

Elena was runner up at Playford International Tournament in summer 2019.

A few months later, she took home the trophy for the Bucharest Open, followed by the Hobart International.

Casper Ruud competed at Playford in 2019. Ruud went on to become the first Norwegian to reach world number two in singles tennis.

Hailed as a talented young player with terrific court movement, Ruud has gone on to win nine titles.

In 2018, Daniil Medvedev hit the courts at Playford Tennis International.

He went on to play his first Grand Slam final the following year at US Open, coming runner-up to Rafael Nadal.

Medvedev was runner up at the 2021 and 2022 Australian Open and took home the trophy at the 2021 US open, which placed him as world world number one for 16 weeks.

Andreescu competed at Playford International in 2019, just before going on to win the US