The story of summer, 2020 in the United States is one of cancelled plans, pent up energy and existential angst. Whether they think COVID-19 is a threat or not, Americans have been forced to reshape their lives in the face of a pandemic that many of our leaders had said would be over by now.

Inescapably, 2020 is also an election year, and this summer has seen an explosion of political expression.

Left-leaning cities have erupted in protests and uprisings, with tens of thousands outraged over the murder of George Floyd at the hands of police officers in Minneapolis, Minnesota and the broader issue of racial injustice in the US.

But what of the others, many of whom live in rural areas and support Donald Trump’s re-election bid?

This summer, all over the country, seafaring supporters of President Donald Trump have taken to the water, staging enormous flotilla boat rallies.

The origin can be traced back to a simple act of defiance in early May, when a Jupiter, Florida resident was banned by the management of his gated community from flying a “MAGA” flag off the end of his dock, referring to Trump’s 2016 election slogan: “Make America Great Again.” 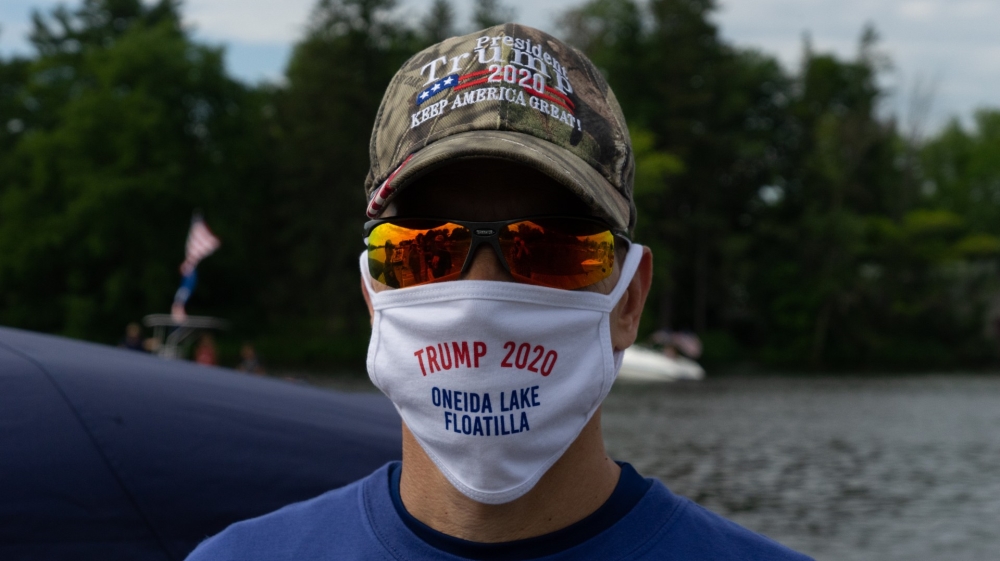 Hundreds of Trump supporters gathered in Brewerton, New York and took to the water to display their loyalty to the US president [Adam Muro/Al Jazeera]

In response, he covered his boat in Trump decals, and when word got out, so-called “Trumptillas” began popping up everywhere, spreading from Florida to North Carolina, Arizona and, most recently, to New York state.

A “MAGA boater” even showed up for the splashdown of SpaceX’s Crew Dragon spaceship on Sunday, August 2, making an appearance on NASA’s live stream of the event.

“Boating is American. The communists shut everything else down, but they haven’t been able to shut this down,” explained David Kolakowski that same day on upstate New York’s Oneida Lake.

“At first we supported the [COVID-19] shutdown, but after that, it’s a lie to hurt the economy because they’re doing everything they can to hurt Trump, so we came out to show support,” he said.

‘I love that he puts America first’

The event’s 23-year-old organiser, Tyler was inspired by a July Fourth rally in South Carolina, which drew a reported 3,400 boats, making it a potential Guinness World Records holder for the largest boat parade.

Biden says US will see new virus restrictions ‘in all probability’

Move asteroids now before they become a threat, researchers argue