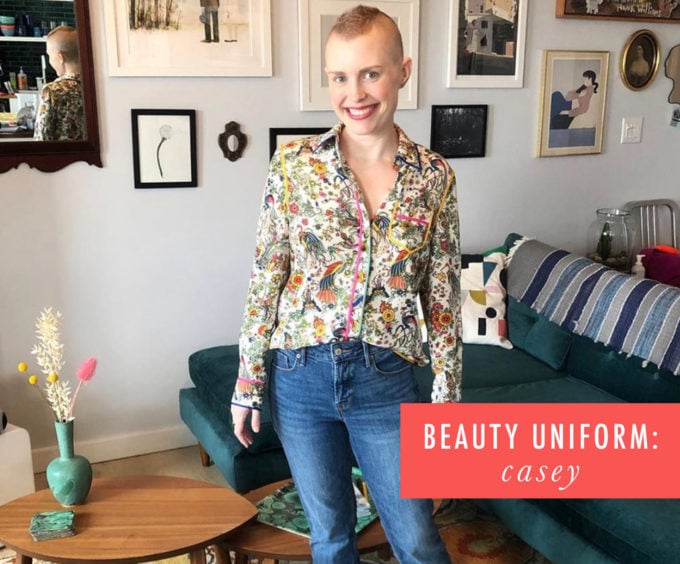 Casey McIntyre is the VP and Publisher of Razorbill, an imprint that publishes books for kids and young adults. (She is also my former colleague!) Casey is like a ray of sunshine, if sunshine was also hilarious. Last fall, at the age of 34, she was diagnosed with stage 3c ovarian cancer. Here, she talks about what she learned this year, as well as her favorite natural deodorant, the perfect tinted lip balm, and her trick for using toner… 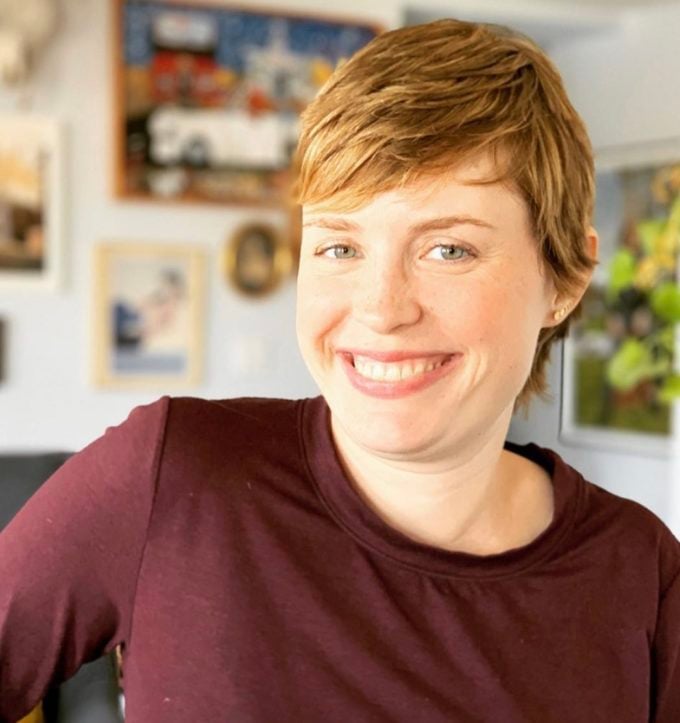 You’ve had quite the year.
Yes, it was like a bad school year. I was diagnosed with ovarian cancer last October and was in remission by early April.

How did you find out?
My husband, Andrew, and I were doing IVF in 2019. IVF is such a rollercoaster — you’re on all these drugs and you feel kind of untethered. I became really bloated and it never stopped, even after the IVF was done. One morning, I woke up so bloated I couldn’t go to work. We went to the ER, and they drained seven liters of fluid from my abdomen. After that, I had a laparoscopy, where they basically go in through your belly button and take a look around. At that point, I was hoping they might tell me that I needed to lose an ovary. Instead, they said, ‘You have stage 3c ovarian cancer and it’s pretty far along. You need to start chemo right away.’ 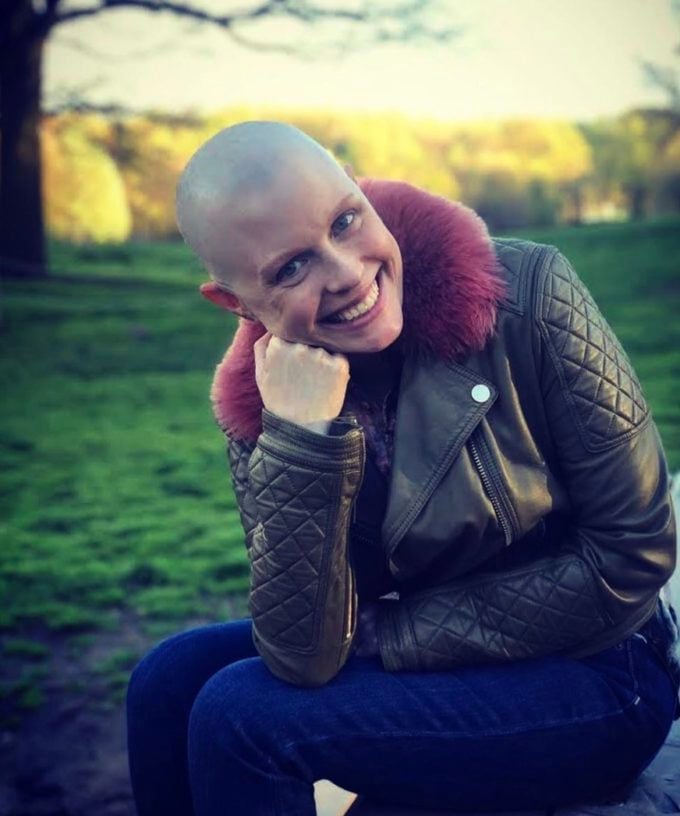 What was going through your mind at that point?
The moments after being diagnosed were really dark. For the first two weeks, before we formed a plan, I had a lot of panic and fear, but as soon as I got my marching orders, I was like, ‘Okay, I can do this.’ I had a big surgery in January, where they removed everything that had cancer on it — a full hysterectomy, part of my spleen, part of my liver, part of my lung. That was the scary part. These days, I’m feeling more hopeful. Doing IVF back-to-back with cancer treatment made me realize: women go through a lot of hard things and don’t talk about them that much. 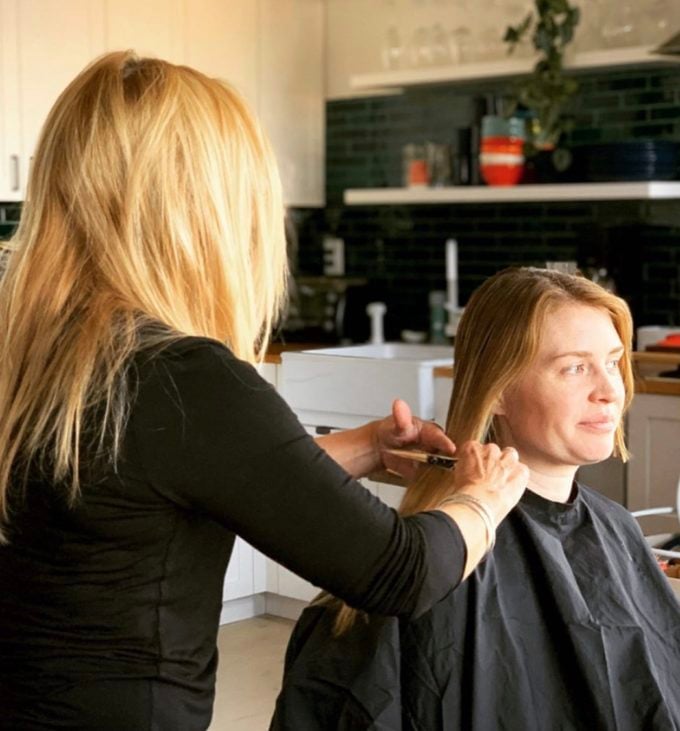 How has your attitude toward beauty changed over the past year?
Overall, I learned that you can handle a lot more than you think. Right when you’re diagnosed, they tell you to get fitted for a wig, before you start to lose your hair. I went and bought this insanely expensive wig. I thought, ‘I’m going to need this. I can’t go to work without it. I can’t go to meetings bald.’ But I never used it once. I used to have super long hair that I loved and was attached to. I was so worried about what I would look like bald. But when it actually happened, it wasn’t as bad as I thought.

Did you shave it at home? How did it feel?
My aunt cuts hair, so she came over and gave me a cute pixie cut in my kitchen. When the pixie started to fall out, my husband shaved my head in the shower. When you save your head, it does feel like taking some of the power back. I felt a lot like G.I. Jane. I kept rubbing my head like, wow, this is kinda badass. One thing everyone says to you when you’re bald is, ‘You have such a good head shape!’ And I’m like, it’s a head. They’re all good. Everyone has a great shaped head! 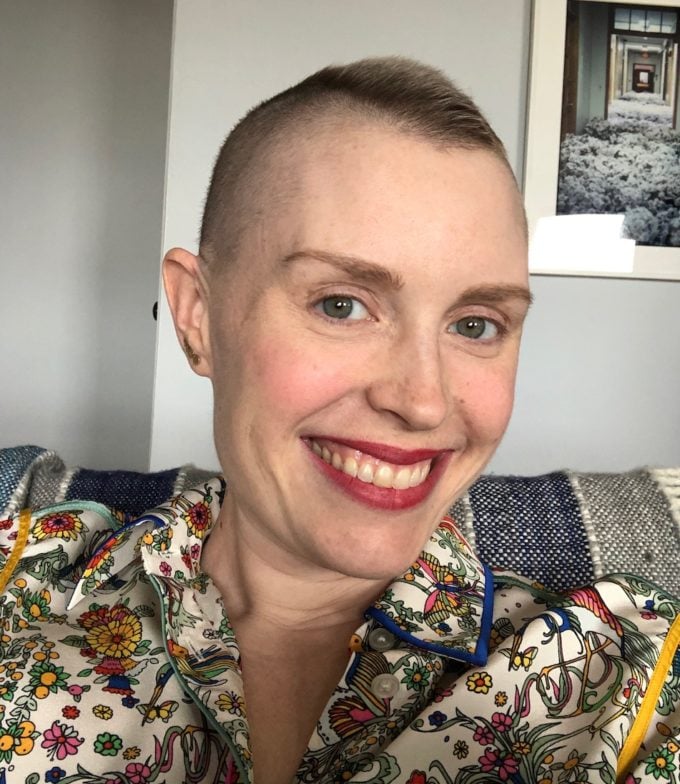 I know you’re a big skincare enthusiast. Walk me through your morning routine.
In the morning, I cleanse with Glossier Milky Jelly, which I like because it feels very neutral on my skin. After that, I use toner, which is probably my favorite product. It removes any dirt the cleanser misses and preps your skin for other products. I really think toner saves my skin. The secret to making your toner super effective is to get nice, reusable cotton rounds that you can put in the wash. Shiseido also makes this nice disposable version. But the ones you get from the drugstore soak up all the product and aren’t that great. I like Thayers Witch Hazel toner, which I buy in a big jar for ten dollars and it lasts forever. I’ll go back and forth between using that and Primally Pure Everything Spray, which is essentially like spritzing apple cider vinegar on your skin. 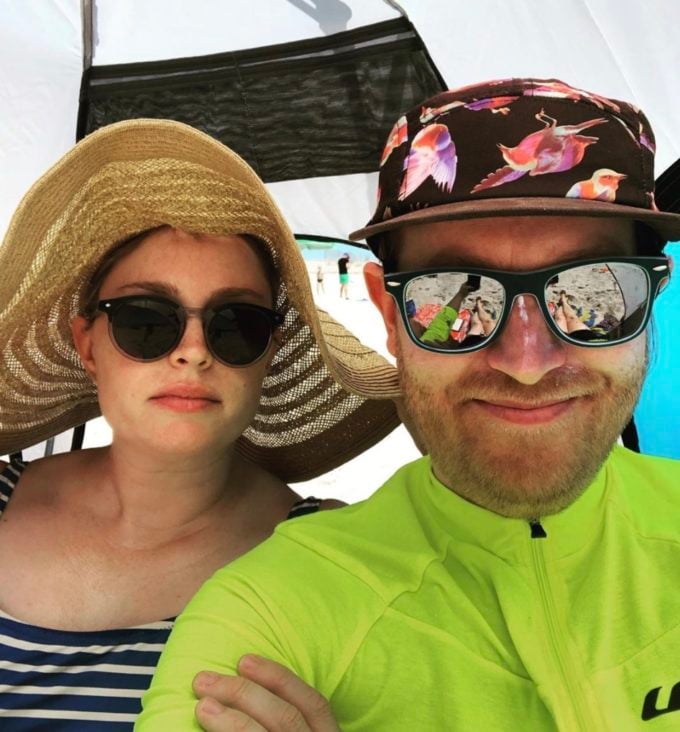 How about moisturizer?
If I’m feeling a little dry, I’ll add some oil to the mix — I like Herbivore Emerald Oil, which is very moisturizing — and then I’ll add some Dr. Jart Ceramidin Liquid. It’s called a moisturizing toner, but I use it as a super light moisturizer, which is perfect for summer when you don’t need something heavy. Sometimes, I’ll mix in some Glossier FutureDew to give myself a little shimmer. Finally, I put on sunscreen. I like Bioré UV SPF 50+, which you can’t feel at all. I got Andrew hooked on the Bioré, too.

I know you love a bold lip, but how about other makeup?
I’m way more into skincare than makeup — I’m 35 and still cannot do cat eyeliner — but I do wear it. Usually, I use NARS Radiant Creamy Concealer under my eyes, and a light blush, like Glossier Cloud Paint in puff or dusk. I like a bold lip, especially NARS pencils in Cruella, a scarlet red, or Let’s Go Crazy, a hot pink Prince color. I also fill in my eyebrows as much as I can. I used to use Boy Brow, but when you don’t have any eyebrow hairs to fill in, it looks more natural to use powder. So lately, I use Anastasia brow powder, and I learned to draw them on with a little brush so they don’t look super fake. 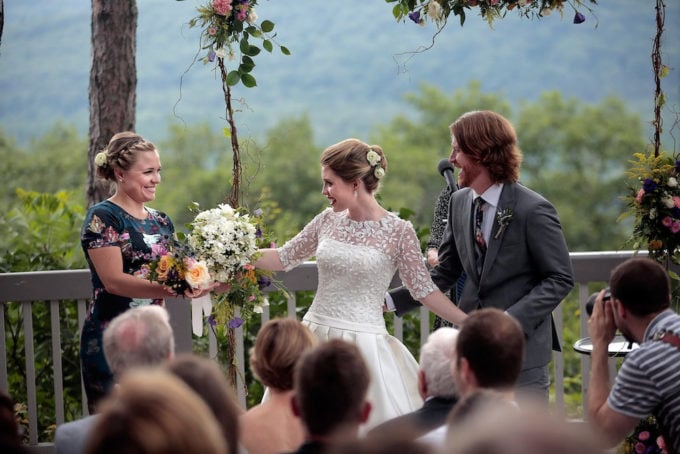 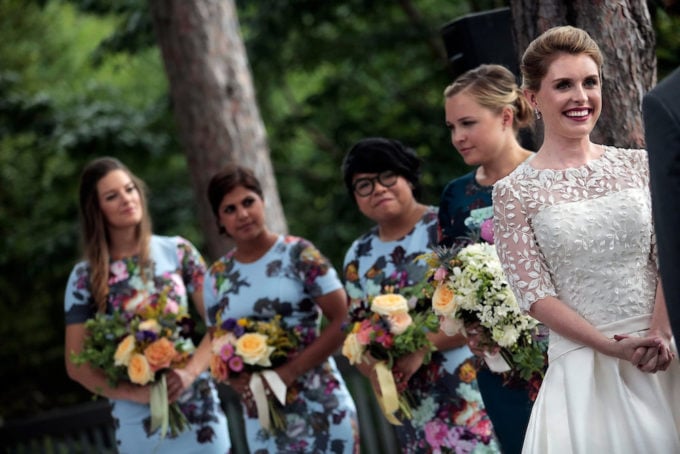 Your wedding in 2015 was so beautiful. Did you do anything special when it came to your makeup?
I chose a specific lipstick for my wedding — NARS Audacious lipstick in Vera. It’s a dark ruby, and I liked that it’s a bold lip that feels classic.

Are there any beauty splurges or special treatments you’re into?
Before both cancer and Coronavirus, I was really into eyelash extensions. With extensions, you wake up looking like Elizabeth Taylor. My eyelashes just grew back, and obviously I haven’t been back to get extensions, so for now I’m using Benefit They’re Real! mascara, which is pretty great, too. I also used to get gel manicures, and now I’m like, maybe it’s not so great to put your hands in little tanning beds. So I bought some Zoya natural nail polish, in Rue. Sally Hansen also just started making a plant-based polish line, and I got one of those in Cherry Amore. 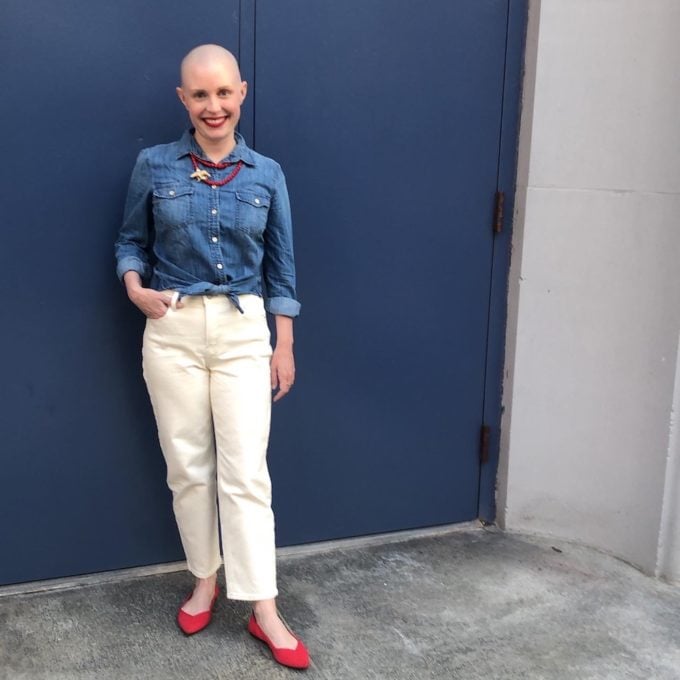 Do you change up your skincare routine at night?
At night, I’ll do a double cleanse with the milky jelly and Belif cleansing gel oil. The Belif oil is one of the best cleansers I’ve tried. If I’m wearing makeup

Miami Marlins season on pause after coronavirus outbreak: What we know now

Move asteroids now before they become a threat, researchers argue

New Train to Link Shanghai Airports in Less Than 40 Minutes