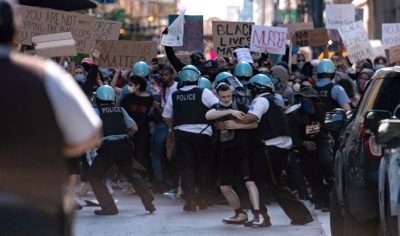 Color Revolution is the term used to describe a series of remarkably effective CIA-led regime change operations using techniques developed by the RAND Corporation, “democracy” NGOs and other groups since the 1980’s. They were used in crude form to bring down the Polish communist regime in the late 1980s. From there the techniques were refined and used, along with heavy bribes, to topple the Gorbachev regime in the Soviet Union. For anyone who has studied those models closely, it is clear that the protests against police violence led by amorphous organizations with names like Black Lives Matter or Antifa are more than purely spontaneous moral outrage. Hundreds of thousands of young Americans are being used as a battering ram to not only topple a US President, but in the process, the very structures of the US Constitutional order.

If we step back from the immediate issue of videos showing a white Minneapolis policeman pressing his knee on the neck of a black man, George Floyd, and look at what has taken place across the nation since then, it is clear that certain organizations or groups were well-prepared to instrumentalize the horrific event for their own agenda.

The protests since May 25 have often begun peacefully only to be taken over by well-trained violent actors. Two organizations have appeared regularly in connection with the violent protests—Black Lives Matter and Antifa (USA). Videos show well-equipped protesters dressed uniformly in black and masked (not for coronavirus to be sure), vandalizing police cars, burning police stations, smashing store windows with pipes or baseball bats. Use of Twitter and other social media to coordinate “hit-and-run” swarming strikes of protest mobs is evident.

What has unfolded since the Minneapolis trigger event has been compared to the wave of primarily black ghetto protest riots in 1968. I lived through those events in 1968 and what is unfolding today is far different. It is better likened to the Yugoslav color revolution that toppled Milosevic in 2000.

In the year 2000 the US State Department, aided by its National Endowment for Democracy (NED) and select CIA operatives, began secretly training a group of Belgrade university students led by a student group that was called Otpor! (Resistance!). The NED and its various offshoots was created in the 1980’s by CIA head Bill Casey as a covert CIA tool to overthrow specific regimes around the world under the cover of a human rights NGO. In fact, they get their money from Congress and from USAID.

In the Serb Otpor! destabilization of 2000, the NED and US Ambassador Richard Miles in Belgrade selected and trained a group of several dozen students, led by Srđa Popović, using the handbook, From Dictatorship to Democracy, translated to Serbian, of the late Gene Sharp and his Albert Einstein Institution. In a post mortem on the Serb events, the Washington Post wrote, “US-funded consultants played a crucial role behind the scenes in virtually every facet of the anti-drive, running tracking polls, training thousands of opposition activists and helping to organize a vitally important parallel vote count. US taxpayers paid for 5,000 cans of spray paint used by student activists to scrawl anti-Milošević graffiti on walls across Serbia.”

Trained squads of activists were deployed in protests to take over city blocks with the aid of ‘intelligence helmet’ video screens that give them an instantaneous overview of their environment. Bands of youth converging on targeted intersections in constant dialogue on cell phones, would then overwhelm police. The US government spent some $41 million on the operation. Student groups were secretly trained in the Sharp handbook techniques of staging protests that mocked the authority of the ruling police, showing them to be clumsy and impotent against the youthful protesters. Professionals from the CIA and US State Department guided them behind the scenes.

The Color Revolution Otpor! model was refined and deployed in 2004 as the Ukraine Orange Revolution with logo and color theme scarves, and in 2003 in Georgia as the Rose Revolution. Later Secretary of State Hillary Clinton used the template to launch the Arab Spring. In all cases the NED was involved with other NGOs including the Soros Foundations.

After defeating Milosevic, Popovic went on to establish a global color revolution training center, CANVAS, a kind of for-profit business consultancy for revolution, and was personally present in New York working reportedly with Antifa during the Occupy Wall Street where also Soros money was reported.

The protests, riots, violent and non-violent actions sweeping across