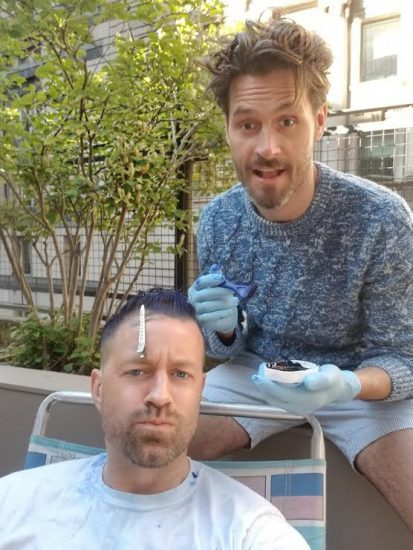 I blue myself for the second time on Day 62 of the quarantine.

The blue, in question, was the hair dye applied to my business casual haircut, a color I have been sporting five weeks now.

Initially, I was concerned about how it would be received by colleagues who I regularly video conference with. While my company does not have official standards associated with appearance, maintaining a “professional” presence is an unwritten requirement. I may adorn myself boldly during personal time, but at work, I am strictly professional.

Early in the pandemic, however, I had seen several social media posts from people contemplating extreme at-home makeovers. Having long been fascinated by the colorful New York punk rockers and club kids featured on Phil Donahue and Geraldo in the early ’90s, I realized the quarantine would provide an opportunity to experiment with what little hair had steadfastly clung to my head.

Feeling emboldened I made the impromptu acquisition of “Splat Blue Envy” while shopping at Duane Reade (the predominant NYC pharmacy) for “just in case” over the counter medical supplies should one of us become COVID symptomatic.

Even as I made the purchase, I was not 100% certain I would follow through with dying my hair. Outside of agreeing to an accidental “whitening” when I was 24 by my hairdresser whom I thought suggested that I try “lightening” it, my hair color has remained a generically dull dirty blonde most of my life.

I had not previously revealed my Party Monster daydreams to Travis, so he was surprised when I came back from the pharmacy with 12 different variations of Vitamin C, Tylenol, and a package of hair dye. I was aging against the machine, I know, but after the initial shock, he was not just supportive but excited to contribute.

As mentioned in a previous post, like the biblical Samson, much of Travis’s superpower comes from a well-groomed mane. Hi

Netflix's The Eddy Captures a Life in Jazz