NEW YORK (AP) — The brothers didn’t have a chance to say goodbye.

As young Polish Jews, each came out of World War II with scars that forever shaped how they viewed the world, and each other.

One survived Auschwitz, a death march and starvation. The other endured cold and hunger in a Siberian labor camp, then nearly died in a pogrom back in Poland.

Alexander and Joseph Feingold chose New York City as the place to start over. It is where they became architects, lived blocks from each other and lost their wives days apart. It was there that they died four weeks apart, each alone, as the coronavirus pandemic gripped the city. 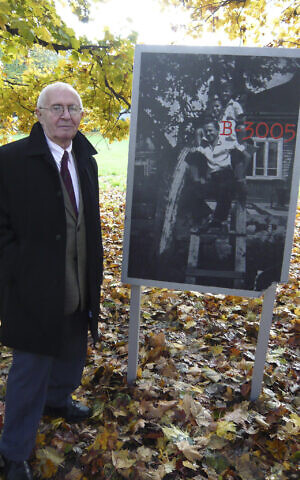 Alexander Feingold stands next to a memorial photo of him as a boy with his two brothers, while B-3005 is the number that was tattooed on his arm when he arrived at Auschwitz (Mark Feingold via AP)

Joe, 97, died April 15 of complications of COVID-19 at the same hospital where Alex, 95, succumbed to pneumonia on March 17.

Joseph Feingold never escaped the guilt of leaving his mother and two younger brothers to escape the Nazis.

When Alexander fell ill, Joseph called his stepdaughter from his assisted living facility and asked her to take him to his brother.

“Joe was wanting to go sit with Alex, to say goodbye and I think, too, to make amends,” Ame Gilbert recalled. “It broke me up having to say no, and having to explain to him that no one could visit because of the virus.”

The siblings were childhood rivals, separated in age by only 18 months. As little boys playing in Warsaw, they pretended to be Native Americans. Firstborn Joe always got to be chief, he recalled in a memoir.

Their youth was shattered when Nazi Germany invaded Poland in 1939 and the Soviet Union seized Poland’s eastern half two weeks later. World War II had started. Joe was 16 and Alex

‘Central Park’ Review: A Cartoon With A Song In Its Heart

A vibrant new podcast hits the airwaves in time for Teachers’ Day!