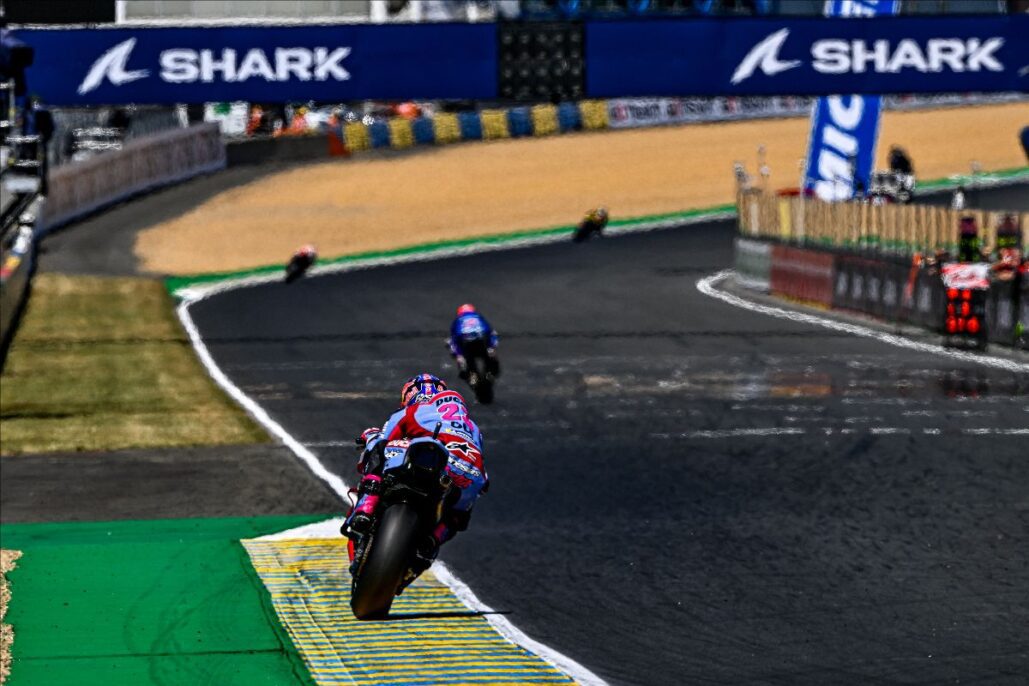 Beast mode engaged! The Italian tops Day 1 ahead of Aleix Espargaro and Rins.

Enea Bastianini (Gresini Racing MotoGP™) was back in Beast mode at the SHARK Grand Prix de France, fastest on Friday and with a new lap record of a 1’31.148 despite a subsequent crash. The Gresini rider heads the timesheets into Saturday by two tenths ahead of Aleix Espargaro (Aprilia Racing), who’s keeping that constant presence in the top echelons rolling. Alex Rins (Team Suzuki Ecstar) completed the top three, less than a tenth off the Aprilia ahead.

2020 World Champion Joan Mir made sure it was both GSX-RRs in the top six at the start of the weekend, with Maverick Viñales (Aprilia Racing), Johann Zarco (Pramac Racing) and Luca Marini (Mooney VR46 Racing Team) rounding out the top 10.

It was a drama-free session for the top ten, but less so for KTM. Brad Binder (Red Bull KTM Factory Racing) crashed at Turn 3, rider ok, and teammate Miguel Oliveira went down twice, at Turns 6 and 10. The Portuguese rider headed to the Medical Centre for an X-Ray on his hand and was given the all-clear. Tech3 KTM Factory Racing’s Raul Fernandez also fell at Turn 10, rider ok.

On the flip side, Marc Marquez (Repsol Honda Team) didn’t crash but did put in a memorable save as he picked up his RC213V on the kerb at Turn 8.

FP2
Bagnaia had been fastest for much of the 45-minute session before Aleix Espargaro took over, but Bastianini then clocked a 1:31.523. However, the Italian had the lap chalked off after a shortcut at Chemin aux Boeufs, but he regrouped with a 1:31.148s just before the chequered flag, aka a new lap record.

No sooner had he reset Johann Zarco’s All Time Lap Record, which dates back to 2018, did the Italian have a spill when he lost the front at the Turn 3/Turn 4 chicane. Rider ok though, and top of the timesheets.

Aleix Espargaro also improved his laptime but remained second in the session, and overall, having notched up a 1:31.350. Rins had been second-quickest in FP1 and proved that was no fluke with third in FP2, too.

Zarco grabbed some headlines too as he almost crashed at Turn 2 but pressed on through the gravel trap and rejoined, but despite that the Frenchman moved up to fourth overall. He ended the day as second Ducati, just pipping Bagnaia.

Mir crashed in the session, rider ok, and Jack Miller (Ducati Lenovo Team) suffered a spill and a run off, rider also ok.

Tribal request to halt Arizona copper mine work is denied

Get A Great Metroidvania And 5 Other Games For Only $7

New On Netflix In June 2022: The Umbrella Academy, Peaky Blinders, And More

Not looking for new Cold War: Blinken on China policy

Explained: What is the controversy around Wimbledon 2022?